"My mom died from ovarian cancer when I was 18," says Angela Moran, a 42-year-old technology professional and mother of two. "She was only 49." 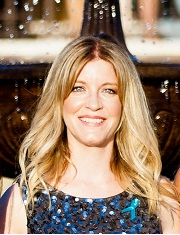 Even though Angela's mother was a nurse at the time, she didn't recognize the symptoms of ovarian cancer until it was too late. Those symptoms--abdominal pressure, fullness, bloating, pelvic pain, indigestion and changes in bladder/bowel habits--are often difficult to detect, even by a trained health care professional. "My mother initially thought she had gall bladder problems, but when she finally went to see her doctor she learned that, not only did she have cancer, it was Stage IV." She died nine months later.

After her mother died, Angela worried that she, too, would get ovarian cancer. Cancer was common in the women in Angela's family--all of Angela's aunts on her mother's side had different kinds of cancer. So, Angela decided to have a genetic test taken and a transvaginal ultrasound as well. Although the genetic test was negative, the ultrasound showed a mass on Angela's ovary. Angela was 39 at the time of the ultrasound.

Angela was referred to Albert Pisani, MD, a gynecologic oncologist with Palo Alto Medical Foundation. Dr. Pisani removed the mass, which turned out to be benign (non-cancerous). However, six months later, another ultrasound revealed two cysts on Angela's ovaries.

"I decided at that point that I wasn't planning to have any more children, so it would be OK to have my ovaries removed to prevent cancer," recalls Angela, who was not only concerned about her own future, but also the future of her two young children.

Dr. Pisani performed the surgery, which also included removal of Angela's fallopian tubes, uterus and appendix, per Angela's request. (Angela had been having some pains where her appendix was located, so it made sense to remove that as well.)

"My surgery, which was at El Camino Hospital, was a success," says Angela. "Dr. Pisani used the da Vinci robotic system, which left only five small incisions on my stomach (including one hidden in the belly button)." Since Angela had children at home, she was happy that she only needed one night in the hospital. "Three days after my surgery, I attended a school event, and everyone was so surprised to see me out and about!"

"I am now involved in Teal Toes, an organization that helps promote awareness of ovarian cancer, especially given that there is no routine screening for this cancer," explained Angela in 2012. "This year Teal Toes is starting on August 20th--my mom's birthday."

As part of the campaign, Angela had recruited several local nail salons, such as Preston Wynne, to offer discounts to those who come in for a teal pedicure (a portion of the proceeds will go toward ovarian cancer awareness).

"I started this fundraiser initially in memory of my mom, but I have continued it each year to also honor the 15,000-plus women we lose every year, and the ovarian cancer warriors who inspire us every day."

Angela encourages all women to learn more about the signs and symptoms of ovarian cancer (the majority of the cases diagnosed each year, unfortunately, are already in an advanced stage, making treatment difficult) and to help spread the word to other women in the community.

Angela, thank you for sharing your story and for helping to raise awareness about this devastating disease.