Debra was used to an active lifestyle. She frequently went on long walks and participated in weight training during the week. When she started experiencing back pain at night, she thought that she had pulled a muscle during training. She was prescribed painkillers and relaxants, but they were ineffective. Debra was admitted to the emergency room when she suddenly experienced weakness in her legs.

She was diagnosed with Miller Fisher syndrome, a nerve disease and rare form of Guillain-Barré syndrome. Miller Fisher only affects between 1 and 5 percent of people with Guillain-Barré syndrome. Symptoms include generalized muscle weakness, abnormal muscle coordination and absence of tendon reflexes. Over the next weeks Debra’s condition rapidly declined. She began to lose mobility in her waist and hips, and when she was discharged from the hospital to the inpatient Rehabilitation Center at El Camino Hospital in Los Gatos, she was bent over and relying heavily on her walker.

“The beginning was hard,” Debra recalls. “Every movement had to be relearned. I’d take one small step forward then many steps backward.” She underwent hours of physical therapy every day in order to relearn how to walk and practice moving like she used to. However, she credits the skilled and attentive staff at the Center for her steady progress. “My physical therapist chose all the right methods to work and strengthen my hips, and she constantly encouraged me, especially on the most frustrating days.”

Maneuvering on and around stairs was particularly difficult, so her physical therapist frequently walked with her to the garage for practice in the stairwell. Debra participated in “exer-games” using the Wii balance board, and she was given strengthening exercises that would help her get up more easily from the floor. The outdoor courtyard was also a favorite spot of hers, and she would often relax outside on the chairs, even when it was raining.

During her rehabilitation, Debra enjoyed meeting other patients, getting together for meals and participating in various activities together. “Not only staff but other patients kept me going. We gave each other the positive reinforcement and motivation needed to make our way to recovery,” says Debra. Despite the severe conditions many patients were in, she remembers the atmosphere as positive and highly supportive.

Debra returned home after 10 days at the Rehabilitation Center, and for the next eight weeks she practiced her exercises independently and saw a physical therapist once a week. Her daily routine initially exhausted her, and she would need to rest or nap after exerting herself. But with a dedicated exercise regimen and encouragement from her coworkers and family, Debra eventually started walking unassisted and was able to drive again soon after. Her pain also receded, although she would experience occasional discomfort at night.

Now Debra is enjoying time outside, resuming her yard work and weight training, and even going on the occasional run. She sometimes experiences numbness and sensitivity in her extremities, but her energy levels are consistently improving. Debra looks back at her stay in the Rehabilitation Center as a critical and empowering step on her road to recovery, and she looks forward to continuing to use what she learned from staff to regaining one hundred percent independence. 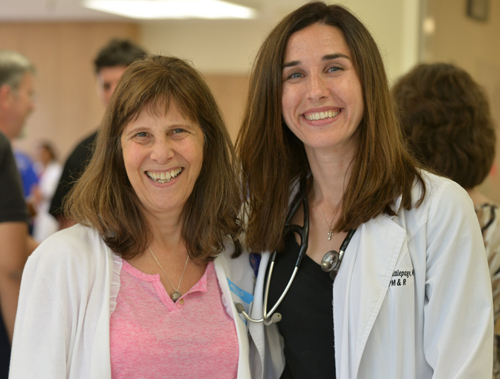