From Patient to Doctorate: How One Psychiatric Admission Led Michaela to Graduation Day

When Michaela walked across the stage to receive her Doctor of Occupational Therapy (OTD) degree at the University of Southern California this past May, it was a full circle moment.

"It was almost six years to the day I had my psychiatric admission," she recalled.

In May 2016, Michaela was finishing up her senior year at Santa Clara University. Throughout her undergraduate years, Michaela exemplified excellence as a leader in student government and various other campus organizations. She was a bubbly, exuberant college student who was just two classes shy of earning two bachelor's degrees in history and sociology. On the outside, Michaela seemed to have her life together, but inside she was struggling.

"I've had ups and downs with my mental health since I was 15," said Michaela, "I'm a double Virgo, so I am very much a perfectionist and I put a lot of pressure on myself to do well in school, and this has led to anxiety and depression over the years."

As graduation day approached, Michaela became distressed and overwhelmed about life after college, she reached a point where she was rarely going to class. She went to therapy on campus to get help, but initially, she was resistant to the idea of taking medication to treat her anxiety and depression. She continued with talk therapy, but after some sleepless nights, Michaela realized she was starting to have suicidal ideations.

"I realized this is not okay," she recalled. "So, I went in for an emergency session with my therapist, and we agreed it was time for psychiatric admission. She recommended El Camino Health, and said 'I know they will take good care of you.'"

Michaela was admitted into El Camino Health's Scrivner Center for Mental Health & Addiction Services. She was initially diagnosed with major depressive disorder. During her 72-hours in the hospital, Michaela learned it is okay to take medication.

"One of the nurses changed my mindset by putting it like this, your brain is having a heart attack with the neurotransmitters, and it is telling you all these things that aren't true. The medication you’re taking is like an aspirin for your brain. Let it help you," said Michaela.

After being discharged, Michaela began treatment in Scrivner's Adult Mood Program, which is designed to help patients develop the coping skills needed to resume life and uses cognitive behavioral therapy as a framework for treatment. Michaela was in the partial hospitalization treatment program.

"A social worker in the program helped me make arrangements, so I did not have to attend my college classes for the rest of the year, I could just focus on getting better," said Michaela.

"'Adulting' is a family system endeavor. This is particularly true for young adults who face a potentially life changing mental health diagnosis," said Miatta Watkins, a clinician for the TAY ASPIRE program. "Our program focuses on teaching young adults skills to manage symptoms, build a life that they consider as worth living, and providing needed support for parents and family members. This proved to be a fertile environment for healing and hope for Michaela and her parents."

As Michaela continued care with the TAY program, she received another diagnosis – bipolar disorder. The condition causes extreme mood swings that include episodes of emotional highs, known as mania, and lows, known as depression.

"When I was diagnosed with bipolar disorder, I remember feeling so discouraged initially, it felt like everything I loved about my personality was this diagnosis," said Michaela.

During manic and hypomanic episodes, patients tend to be extremely upbeat, energetic, and talkative. They are in a euphoric state where they’re confident and active, with racing thoughts and a tendency to talk fast. During depressive episodes, patients tend to feel sad, hopeless, and at times suicidal. They also tend to have trouble concentrating and doing even simple things, like going to class.

"My care team helped me realize that my personality is not an illness," said Michaela. "The media portrays bipolar disorder as this extremely unstable, scary thing, but it's just another mental condition that can be managed with the right tools, medication, and skills."

For Michaela, the family centered approach to therapy at El Camino Health was critical and so was the right medication regimen, but her favorite part was occupational therapy (OT).

"Occupational therapy was something I always looked forward to," recalled Michaela. "I felt so seen by the therapists. They helped me realize that I am a person outside of this diagnosis, and I had potential regardless of the big scary words."

"It was hard balancing being a student, working, and a new mental health diagnosis," she recollected, "it was challenging, but I grew so much."

Michaela's hard work helped her get accepted into the University of Southern California's Chan Division of Occupational Science and Occupational Therapy, which is currently ranked as the top graduate occupational therapy program according to U.S. News & World Report. 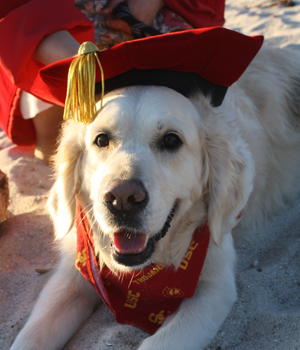 In 2021, Michaela earned her master's, and in 2022 she completed her doctorate, with her psychiatric alert service dog, Niko at her side.

"If I could have a conversation with my younger self, I would just want to give her a huge hug, and let her know everything is going to be okay," said Michaela. "The future is unknown, and that's scary, but at the same time, you are capable, competent, and confident. You will make it work, and you will thrive and succeed."

Michaela just accepted a school-based occupational therapy position for her residency. She also plans to train Niko to be a therapy dog, so she can be her sidekick at work.