Our specialists in gynecologic cancers — cervical, ovarian and uterine — offer you a personalized care plan with the latest advances in diagnosis and treatment.

According to the Centers for Disease Control and Prevention, approximately 71,500 women in the U.S. are diagnosed with gynecologic cancers each year. Gynecologic cancers include any cancer that starts in a woman’s reproductive organs: cervix, ovaries, uterus, vulva or vagina. Each has its own symptoms, risk factors and treatments.

Gynecologic oncologists (specialists in female reproductive cancers) at El Camino Health are fellowship trained to expertly treat cervical, ovarian and uterine cancers. They bring you the latest advancements in cancer treatment and provide care with warmth and compassion — treatment delivered the way they’d want their own family members to be treated.

In addition to advanced therapies, El Camino Health offers a variety of specialized services, support and assistance to address the psychological, emotional and spiritual needs of you and your family members throughout treatment and recovery.

The cervix is the narrow, lower portion of the uterus. Cervical cancer occurs most often in women under 50 and is almost always caused by the human papillomavirus (HPV), the most common type of sexually transmitted infection. Cigarette smoking is also a risk factor for cervical cancer.

Unlike other gynecologic cancers, cervical cancer has an effective screening test. An annual pelvic exam and Pap test are the best ways to detect precancerous cells in the cervix and remove them before they become cancerous. In addition, vaccines are available to prevent the most harmful kinds of HPV and genital warts. Vaccination is recommended at age 11 or 12 and can be given up to age 26.

Cervical cancers typically develop gradually. Common symptoms that occur once the cancer has developed and begun spreading include:

When an annual exam reveals abnormal cells, there are several ways to test for cancer. If a test reveals you have cervical cancer, treatment options depend on the initial staging and extent of disease at diagnosis.

At El Camino Health, our doctors perform laparoscopic or robotic-assisted surgery to remove the uterus and cervix, called a hysterectomy. Radiation therapy is another option that doctors may recommend alone or in addition to surgery in early stages of cancer. Other options include freezing the tumor with cryosurgery or destroying the tumor with heat energy using laser surgery. Chemotherapy may also be recommended in addition to surgery.

Chemotherapy uses anticancer drugs to destroy cancerous cells. Chemotherapy targets cancer cells but can also kill “healthy” cells and cause side effects. Our experienced team at El Camino Health Cancer Center works with you to develop the best evidenced-based treatment plan and manages any potential side effects of the chemotherapy aggressively. By managing your symptoms, we can keep your treatment course on track for maximum effectiveness.

El Camino Health is advanced among community hospitals in using targeted therapy to create a unique combination of drugs to combat cervical cancer. We study a sample of the tumor in a lab to analyze the proteins and chemicals that make up the tumor. Then, we use current data to decide which drugs will have the maximum effect in eliminating the cancer.

The ovaries are the primary female reproductive organs and have two main functions: the production of female sex hormones and the development and release of eggs. One ovary is located on either side of the uterus.

According to the Ovarian Cancer National Alliance, ovarian cancer is the deadliest of all gynecologic cancers and the ninth most common cancer among women. Only 20 percent of ovarian cancers are detected at an early stage, according to the American Cancer society — this is because symptoms are general and there’s no effective screening test. Ovarian cancer risk increases with age, with most cases occurring after menopause. Obesity is another risk factor.

Although the exact cause of ovarian cancer is unknown, risk reduction strategies include eating a low-fat, healthy diet and maintaining a healthy weight. Family heritage and genetics, including carrying the BRCA1 or BRCA2 mutation, have been linked to ovarian cancer. Factors that can lower your risk include use of birth control pills, pregnancy, breastfeeding and removal of the ovaries if you’re at high risk of developing ovarian cancer.

Ovarian cancer has been considered a “silent disease,” without any early warning. Symptoms can be vague and subtle. As a result, women don’t often seek medical help until the cancer has advanced. Common symptoms may include:

A routine gynecologic exam rarely identifies an early stage ovarian cancer. Typically, there’s a suspicious mass, which is identified through ultrasound or other imaging tests. Surgical staging with biopsy (tissue sample) and blood tests can help your doctor confirm a diagnosis. A gynecologic oncologist will recommend the best surgical approach and treatment plan. Treatment may also include chemotherapy and radiation therapy.

Chemotherapy uses anticancer drugs to destroy cancerous cells. Chemotherapy targets cancer cells but can also kill “healthy” cells and cause side effects. Our experienced team aggressively manages any potential side effects of the chemotherapy. By managing your symptoms, we can keep your treatment course on track for optimal effectiveness.

The uterus is the hollow, pear-shaped organ in a woman’s lower abdomen where a baby grows during a pregnancy. The lining of the uterus is called the endometrium, where potential cancer may arise, called endometrial cancer.

Endometrial cancer is the most common gynecologic cancer in the U.S., according to the American Cancer Society. Contributing factors to uterine cancer include age (menopausal or older), family or personal history of certain cancers or precancerous conditions, estrogen therapy, obesity and diabetes. The National Cancer Institute states that more than 40 percent of endometrial cancer cases are attributed to being overweight.

There’s no specific test or exam for early detection of endometrial cancer. Most frequently reported symptoms include:

A physical exam and taking tissue samples (biopsy) for further study can help your doctor form a diagnosis. If you have uterine cancer, other imaging tests and blood tests can help stage the disease and determine if the cancer has spread.

Our gynecologic oncologists will work with you to formulate a treatment plan using evidenced-based research. Treatments include surgical removal of the uterus (hysterectomy) and sometimes the fallopian tubes, ovaries and lymph nodes in the pelvis. In many cases, doctors at El Camino Health use minimally invasive techniques, such as robotic-assisted surgery.

Radiation therapy may be used in addition to surgery to target specific regions of the pelvic area to reduce the risk of recurrence.

Radiation oncologists also have the specialized skills required to perform brachytherapy, a method of implanting radiation seeds directly into the uterus. We’re one of the few hospitals in Silicon Valley to treat uterine cancer with brachytherapy, which offers you a much shorter course of treatment and less damage to surrounding tissue. The results are identical to standard radiation therapy.

Chemotherapy uses anticancer drugs to destroy cancerous cells. Chemotherapy targets cancer cells but can also kill “healthy” cells and cause side effects. Our doctors aggressively manage any potential side effects of the chemotherapy. By managing your symptoms, we can keep your treatment course on track for optimal effectiveness.

To make an appointment, get information, schedule a consultation or refer someone, call 650-988-8338. 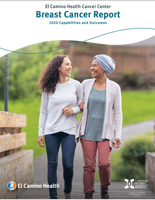 Read About Our Clinical Outcomes For Cancer Care

The more you know the more informed decisions you can make about your care.
Read About Our Clinical Outcomes For Cancer Care

Make a gift and make a difference for patients and families.
Donate Now