How the Healthy Heart Works

The heart has four chambers. The upper two chambers are the atria, and the lower two are the ventricles (Figure A). The chambers are separated by a wall of tissue called the septum. Blood is pumped through the chambers, aided by four heart valves. The valves open and close to let the blood flow in only one direction.

Congenital defects may involve a valve, a chamber, the septum, an artery or blood flow issues. 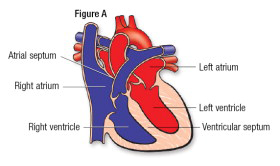 The four heart valves are:

Each valve has a set of "flaps" (also called leaflets or cusps). The mitral valve normally has two flaps; the others have three.

The normal blood flow is a cycle that flows like this; body-heart-lungs-heart-body. Next we will look at each step.

From the body to the heart.
Figure B below shows dark bluish blood, low in oxygen, flowing back to the heart after circulating through the body. It returns to the heart through veins and enters the right atrium. This chamber empties blood through the tricuspid valve (B) into the right ventricle. 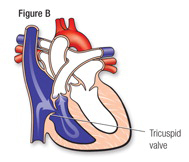 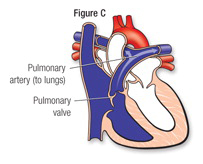 From the lungs to the heart
After the blood is refreshed with oxygen, it's bright red. Then it returns to the left heart through the pulmonary veins to the left atrium. From there it passes through the mitral valve (D) and enters the left ventricle. 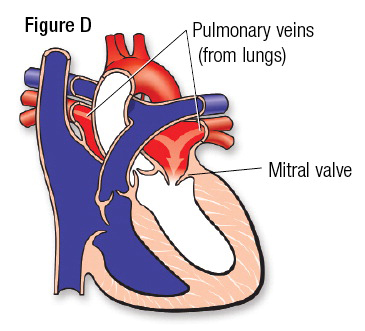 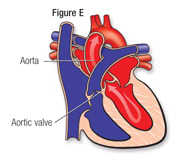 From the heart to the body
The left ventricle pumps the red oxygen-rich blood out through the aortic valve into the aorta (E). The aorta takes blood to the body's general circulation. The blood pressure in the left ventricle is the same as the pressure measured in the arm.

This article first appeared in the February 2016 edition of the HealthPerks newsletter.