Breathing is essential to life. Every cell in the body needs oxygen to live and carry out their normal functions.

It is not until there is a problem with their breathing that people notice the important role their lungs and respiratory system have in keeping their bodies strong and healthy. 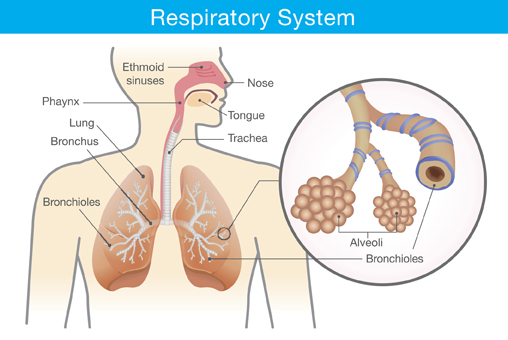 The lungs are a pair of cone-shaped organs made up of spongy, pinkish-gray tissue. They take up most of the space in the chest. The lungs fully mature between the ages of 20-25 and can hold about six liters of air. After about the age of 35, it is normal for lung function to decline gradually with age which can make breathing slightly more difficult as one gets older. Staying active, avoiding tobacco smoke and other air pollutants, eating a balanced diet, and getting regular check-ups are just a few ways to protect the lungs and breathe easier at any age.

A persistent cough, a silent wheeze, shortness of breath, and frequent respiratory infections are mild and subtle symptoms to be aware of. It is important to pay attention to these symptoms as they could be the first signs of a more serious lung condition, including chronic obstructive pulmonary disease (COPD) or lung cancer. Knowing the early warning signs of lung disease can lead to early detection and more treatment options before the condition becomes advanced or life threating.

Sudden difficulties in breathing or shortness of breath should be discussed with a doctor right away.

COPD is a term that describes lung diseases such as asthma, chronic bronchitis, and emphysema that cause swelling in the airways. The swelling restricts airflow, damages the airways and limits lung capacity, which makes it difficult to breathe. With asthma, the airways become inflamed and the muscles around the airways tighten making it difficult for air to pass through the lungs. With chronic bronchitis, the airways have become inflamed and the linings produce too much mucus, which builds up and leads to coughing and difficulty breathing. With emphysema, the walls between the air sacs in the lungs disintegrate. This leaves fewer, larger sacs with less surface area to exchange oxygen and carbon dioxide leaving people with emphysema short of breath.

While there is no cure for COPD, steps can be taken to keep symptoms under control and slow the disease’s progression. Treatment options for COPD have advanced significantly over the past 15 years.

Lung cancer usually starts with a small rounded growth, also known as a lung nodule, in the lining of the bronchi and bronchioles or air sacs and develops over a period of many years. While lung nodules are fairly common and most often are not cancerous, all lung cancers start with a lung nodule. Diagnosing lung cancer in early stages is challenging because symptoms often mimic those of common viruses. Lung nodules are often hard to biopsy because of their location within the lungs. Even though cigarette smoking is by far the most common cause of lung cancer, there has been a recent increase in lung cancers among people who have never smoked and have not been exposed to toxic substances.

Whether it’s a mild respiratory condition or a chronic condition that impacts your lung health, having a dedicated lung care team can have a major impact on your health and well-being. A lung specialist can assess the health of your lungs and suggest treatments based on the specific condition. For details about lung care services at El Camino Health, call 650-962-5813.