Sepsis, a life-threatening condition caused by the body’s response to infection, which can lead to tissue damage, organ failure, amputations and death, affects 1.7 million people in the United States each year.

For a condition that kills one person every two minutes, sepsis is relatively unfamiliar to most people because the name “sepsis” isn’t used very often and when the condition is talked about, it’s often referred to incorrectly as “blood poisoning.” Most of the time when someone dies from an infection, it’s usually sepsis.

Anyone can develop sepsis, even infants, but it’s most common in older adults, people with chronic diseases and those with weakened immune systems. Sepsis impacts people of all ages and levels of health.

Many doctors view sepsis as a three-stage syndrome, starting with sepsis, progressing through severe sepsis to septic shock — the point where inflammation can damage multiple organ systems, causing them to fail. The goal is to treat sepsis during its mild stage, before it becomes more dangerous.

When the human body fights an infection, it releases infection-fighting chemicals into the bloodstream. Sepsis occurs when those chemicals go beyond the actual infection to trigger inflammation in other parts of the body. Microscopic blood clots then form and begin to block blood and oxygen flow to organs and tissues causing them to shut down and fail. When organ failure occurs and is accompanied by low blood pressure, it’s called septic shock. Septic shock carries the highest risk of death and complications. 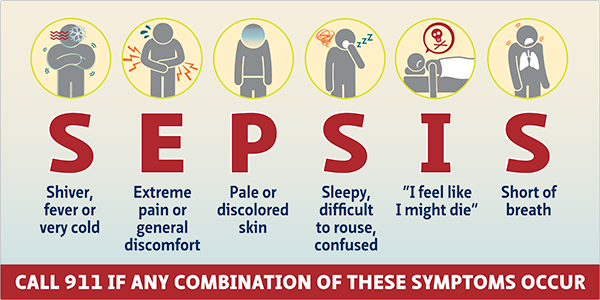 It’s important to know that sepsis is not contagious. But, the infection that triggered sepsis could be contagious so practicing good infection prevention techniques can decrease the chance of developing sepsis. Tips to prevent the spread of infection:

Sepsis symptoms start off very subtly and may mimic a flu or virus. It’s important to look for the warning signs of sepsis. Spotting these symptoms early could prevent the body from entering septic shock, and could save a life.

Here are some of the more common symptoms of Sepsis:

S – Shiver, fever, or very cold
E – Extreme pain or general discomfort (“worst ever”)
P – Pale or discolored skin
S – Sleepy, difficult to rouse, confused
I – “I feel like I might die:”
S – Short of breath

Watch for a combination of these symptoms, especially if there’s been a recent cut, scrape, surgery, or any type of illness or invasive procedure. If sepsis is suspected, call 911 or go to a hospital Emergency Room and say, “I am concerned about sepsis.”

While there are not doctors who specialize in treating sepsis, there are hospitals and doctors who can quickly identify sepsis and treat it appropriately. El Camino Hospital has achieved The Joint Commission’s Disease-Specific Care Certification in the management of sepsis and has demonstrated the ability to produce better patient outcomes and lower sepsis mortality rates. At El Camino Hospital, our healthcare team follows highly practiced guidelines to prevent infection. From regular hand washing to close monitoring of patients for sepsis symptoms, all members of the care team are dedicated to patient safety.

This article first appeared in the September 2018 edition of the HealthPerks newsletter.