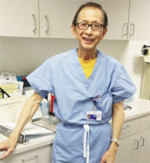 Dr. Ken Liu, Obstetrics and Gynecology practitioner, points out that diabetes can greatly impact the health of mothers and babies. This is the main reason for controlling blood sugar during pregnancy.

Gestational diabetes can greatly increase the incidence of fetal malformations, miscarriage and stillbirths. Therefore, it is important to control blood sugar while preparing for pregnancy. Patients who are already diabetic should keep their sugar levels under control before getting pregnant. Those without a history of diabetes should monitor their blood sugar levels during pregnancy and avoid developing gestational diabetes mellitus.

According to Dr. Liu, who specializes in Obstetrics and Gynecology, diabetes affects the fine blood vessels in the body, such as those in the kidneys. From 1985 to 2013, the incidence of diabetes has increased almost tenfold. The increase is especially pronounced with type 2 diabetes. The main reasons for this increase include longer life expectancies, a western diet, prevalence of obesity, and lack of exercise.

He went on to say that research has shown gestational diabetes can increase the risk for a baby to develop diabetes later in life. Babies born to mothers with gestational diabetes are more prone to becoming too big for natural childbirth. “Therefore, I always warn expectant mothers to watch their weight and to keep weight increase within 25 to 28 pounds during their pregnancies,” noted Dr. Liu.

Dr. Liu reminds pregnant women to take control of their blood sugar before becoming pregnant, keeping fasting blood sugar levels lower than 126 mg/dl, and after-meal glucose levels lower than 200 mg/dl. If this range is not maintained, various complications such as miscarriage, premature birth, deformity, and stillbirth may occur. The developing fetus may suffer from malnutrition and failure to thrive. On the other hand, some fetuses may become overweight babies with large upper bodies but small brains. During delivery, overweight babies often require C-section – specifically, 70% of overweight babies are born with the assistance of surgery.

Conversely, gestational diabetes may cause placental malnutrition, early placental exfoliation, or inadequate amniotic fluid, increasing the probability of stillbirth by three or four times. In addition, the mother may develop ketoacidosis, increasing her chance of death. “All of these complications result from the blood sugar being out of control,” added Dr. Liu.

Dr. Liu points out that while diabetes may cause many problems for mothers and babies, it must be treated with caution. Through healthy diet and good exercise, and following instructions from an experienced physician, mothers can control their blood sugar levels, ensuring a safe and smooth pregnancy – and a healthy baby.

Doctor’s Profile: Dr. Kenneth Liu is board certified in Obstetrics and Gynecology. Born in Yunlin, Taiwan, Dr. Liu graduated from Sun Yat-Sen University and completed his residency at Detroit-Macomb Hospital, Michigan. He joined the staff at El Camino Health in 1985. Languages include Mandarin, Taiwanese, and English.