A cerebral (brain) aneurysm is a thin, weakened part of the wall of a blood vessel in the brain that balloons out as it fills with blood. It can leak or cause bleeding in the brain.

About 1.5 to 5 percent of Americans have or will develop a brain aneurysm, but most show no symptoms — especially if an aneurysm is small and doesn't leak or break. Aneurysms may enlarge slowly, making blood vessels weaker as they stretch. Some press on nerves or tissue, and may bleed or burst. This can happen without warning, causing hemorrhagic stroke, moderate to severe brain damage or death.

You can have a brain aneurysm at birth, but it's rare. A family history of brain aneurysms is also rare; although, they're more common if you have certain inherited diseases. Aneurysms are more common after the age of 40, and women face a slightly higher risk, especially after menopause.

The type, condition, shape and size of the aneurysm affect its chance of bleeding or bursting. Once an aneurysm ruptures, it's likely to burst again causing further damage. Having one aneurysm means there’s a 15 to 20 percent chance of having more, so it's important to get medical help to prevent serious complications, including:

Every brain aneurysm is unique, including its size, shape and location. Aneurysms often develop along major arteries, especially at weaker areas where arteries branch out. Experts classify aneurysm sizes ranging from "small," or less than 5 mm (1/4 inch), to "giant," which are larger than 25 mm (1 1/4 inch).

The most common brain aneurysm is the saccular, or sac-like aneurysm, often seen on arteries at the base of the brain. It's sometimes called a "berry" aneurysm because it resembles a berry on a vine. It may appear with or without a well-defined "neck" or stem where it connects to the blood vessel wall.

There are no sure ways to prevent a brain aneurysm, but making healthful lifestyle changes, coping with stress and managing risk factors can help. Some of the most important preventive steps you can take are to control high blood pressure, quit smoking if you're a smoker and avoid alcohol consumption.

Factors that can increase the risk of an aneurysm bleeding include heavy lifting or straining, strong emotions that raise blood pressure and some medications, such as blood thinners.

Brain aneurysms are more common in people with heart or vascular disease, including atherosclerosis, and circulatory disorders, such as arteriovenous malformations. Some genetic conditions, such as polycystic kidney disease, can cause aneurysms.

Other factors that can cause an aneurysm include infection, head and neck injuries, cancerous head and neck tumors, and drug abuse — especially the use of stimulants, such as cocaine or methamphetamine (meth).

Women should ask their doctors about the use of oral contraceptives. Post-menopausal women face higher risk than men and may benefit from screening and medication, including assessment of hormonal or other medications.

Ask your doctor about personal risk management or whether you'd benefit from screening if you have multiple risk factors, such as two immediate family members who have had ruptured aneurysms. If an aneurysm is found early, your doctor can discuss risks and treatment options. Treatment before an aneurysm ruptures is generally associated with a better outcome.

Brain aneurysms can grow without any symptoms and often go undiagnosed until after they've ruptured. Some are found during tests such as a brain scan done for other reasons.

If an aneurysm presses on the nerves in your brain, you may experience symptoms, such as:

A subarachnoid hemorrhage may include sudden onset of symptoms, including:

Symptoms of hemorrhagic stroke include:

If you notice these symptoms, seek help immediately. Brain aneurysm symptoms can resemble other medical conditions, so ask your doctor for a diagnosis.

At El Camino Hospital, your doctor will take your medical history and do a physical examination, as well as other testing to diagnose an aneurysm. Testing may include imaging procedures, such as a CT scan, MRI or angiogram.

Most aneurysms don't bleed, but if an aneurysm bleeds or ruptures, treatment is urgent. You face a high risk of re-bleeding, further brain damage or even death. At El Camino Health, our neuroscience team provides fast diagnosis and highly skilled and specialized care for these and other medical emergencies.

Your treatment plan will depend on a number of factors, including the type, size and location of your aneurysm and the extent of your condition — including whether any bleeding has occurred. Your care will involve evaluation and discussion among a team of highly skilled specialists, including neurosurgeons with endovascular expertise, a neurointerventionist and others.

Some aneurysms don't require treatment, while others may require surgery. Treatment may include:

Your follow-up care will vary, depending on the type of treatment. El Camino Health also offers comprehensive rehabilitation services to address any brain damage from prior bleeding. After treatment, your doctors may perform further procedures, such as an angiogram or other brain imaging to assess the treatment's success.

Expert Care for All Types of Strokes

See how El Camino Health compares to other hospitals. 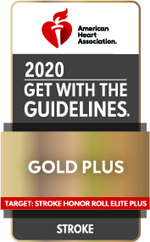