Stroke occurs when part of your brain is damaged by a lack of blood flow and nutrients due to a blocked blood vessel leading to or within your brain. Stroke can also occur when there is bleeding from a ruptured blood vessel in or around your brain. When parts of your brain are deprived of essential oxygen and nutrients, brain cells will begin to die within minutes. Once the brain cells die, they'll no longer function — brain cells do not regenerate. As a result, you can suffer brain damage resulting in severe disability or death.

Stroke can be caused by a clot or a broken blood vessel. Types of stroke include:

More than 80% of strokes are preventable, according to an estimate by the American Stroke Association. You can lower your stroke risk significantly with lifestyle changes, including:

People with atrial fibrillation (AF), a type of heart arrhythmia, have an even higher risk of stroke — they’re five times more likely to have a stroke than someone without an irregular heartbeat.

If you have AF, your heart doesn't pump blood as it should, making it more likely to form a clot in an area of the heart called the left atrial appendage (LAA). If a clot forms here and travels to another part of your body, it can block blood flow to your brain, causing a stroke. A tiny implantable device called WATCHMAN™ can stop clots from forming and prevent strokes, offering an alternative to taking blood thinners.

When a stroke happens, blood flow is blocked from a part of the brain that controls a specific bodily function. Stroke symptoms prevent that part of the body from working properly.

A stroke is a medical emergency. Learn to recognize the warning signs — and others listed below. It's important to act immediately and be taken to the hospital quickly. Call 911 if you note a sudden onset of stroke symptoms.

This memory aid will help you recognize the warning signs of a stroke:

Other stroke symptoms — which typically occur suddenly — may include difficulty seeing in one or both eyes, dizziness or loss of coordination, a severe headache with no known cause, nausea or loss of consciousness.

A "Mini-Stroke" (TIA) Is a Medical Emergency

Although it's sometimes called a mini-stroke, a TIA is considered a "warning stroke" and requires immediate medical attention. It happens when a clot blocks blood flow to part of the brain for a short time. The average TIA lasts about a minute, and most are over within five minutes — usually without permanent brain injury.

However, after a TIA, there is a significant risk of another stroke — especially within the first few days and as long as three months after that. Rapid, expert diagnosis and treatment within 24 hours can reduce the risk of having a stroke after a TIA.

TIA symptoms may disappear within minutes or an hour, but rarely last more than 24 hours. It can be difficult to tell whether the symptoms are from a TIA or a stroke, so it's important to get to the hospital quickly for expert diagnosis and treatment. Stroke therapies may be able to stop a stroke while it's happening by dissolving the blood clot or stopping the bleeding. Clot-dissolving drug therapy must be delivered within three hours — and up to four and a half hours in some patients.

Experts use risk assessment tools — such as the ABCD2 score — to predict the likely risk of a stroke within two to 90 days after a TIA and the type of treatment required. This score assesses variables such as type and duration of symptoms, age, blood pressure and health conditions, such as diabetes.

Emergency care and fast, expert treatment for stroke is available at El Camino Health, which is nationally recognized for excellence in stroke care. Our expert stroke team is available 24 hours a day, seven days a week to help you.

When you come to El Camino Health with stroke or TIA symptoms, our specialists will act quickly to gather information, perform diagnostic tests and start appropriate treatment right away.

Your doctor uses diagnostic testing to see how your brain is functioning and identify any abnormalities. There are three primary types of stroke diagnostic procedures:

At El Camino Health, our stroke care experts will act quickly to evaluate your symptoms and start treatment. Treatment depends on the type of stroke and other factors. Certain medications can dissolve clots and restore blood flow if given within three hours — and up to four and a half hours in some patients — and may improve your chances of recovery. Other treatments can include minimally invasive neurointervention and surgery.

Expert Care for All Types of Strokes

See how El Camino Health compares to other hospitals. 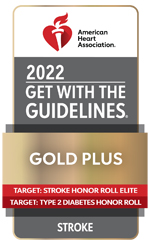