Type 2 diabetes risk is higher among Chinese Americans than their white counterparts.

Being overweight or obese increases the chances of developing type 2 diabetes.

At the same body mass index (BMI), Chinese Americans are at least 60 percent more likely to develop type 2 diabetes than white Americans, due to a combination of genetic and environmental factors.1 These factors include:

BMI is a ratio of weight to height and estimates total body fat. The risk of developing many diseases increases with a higher BMI. Because Asian Americans have increased health risks at a lower BMI, the American Diabetes Association recommends that Asian Americans get tested for type 2 diabetes when their BMI reaches 23 or higher; the general public at a BMI of 25 or higher.

Research has confirmed that using the typical BMI cutoff of 25 as a screening guideline would fail to identify one out of three Asians with type 2 diabetes.2

The BMI cutoff points on this chart are specifically designed for Asian Americans.

However, due to these differences in BMI indicators, waist circumference may be is a more accurate prediction of diabetes risk for Asian Americans. The target measurement for waist circumference should be less than or equal to 90 cm (35.5 in) for men and 80 cm (31.5 in) for women. If your waist measurement is more that the recommended target, talk to your doctor about your risk for diabetes.

1Perceptions and Management Affecting Psychosocial Factors Affecting Type 2 Diabetes Mellitus in Chinese Americans (2009) in Journal of Diabetes and Its Complications. 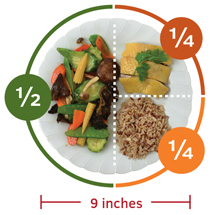